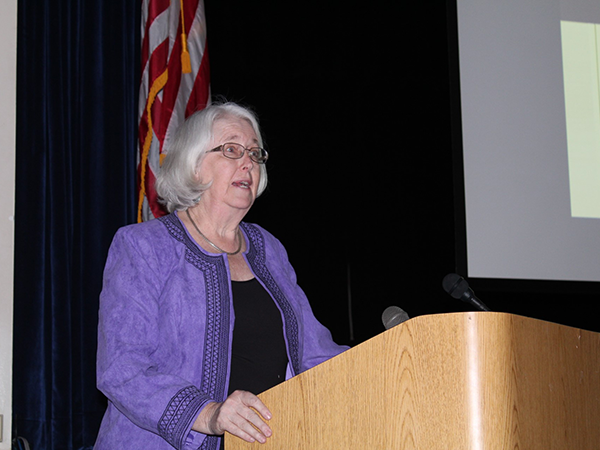 Rebecca “Becky” Crabtree won’t let the echoes fade.  The Bluefield State College graduate and author inspired a B-State Honors College Speakers Series audience with stories of the lives and legacies of Dr. Henry Lake Dickason and Dr. William Robertson.  Crabtree, a Monroe County educator, has authored extensively-researched biographies of Dickason, who was BSC President (1936-1952) and Robertson, a BSC alum who served on the staff of five United States Presidents.

Dickason, born two generations after the Civil War, was the grandson of enslaved people on both sides of his families.  In her biography about Dickason, “Try and Be Somebody,” Crabtree described how his leadership and determination proved invaluable as he piloted the College through recovery after a fire seriously damaged Mahood Hall.

“There was no money to rebuild,” she recounted, “so he raised the funds.”  In fact, he launched a $1M campaign that was instrumental in the construction of Arter Gymnasium, a technical education building (Dickason Hall) and new additions at Conley Hall, according to Crabtree.  Under his watch, Count Basie, Langston Hughes, Thurgood Marshall, Duke Ellington, Joe Louis, and Dizzy Gillespie visited the “campus on the terraced hills.”

Crabtree was similarly inspired by another Bluefield State alum—Dr. William Bernard Robertson.  She collaborated extensively with Robertson on his autobiography.  His life story describes Robertson’s  lifelong commitment to the advancement of civil and human rights.

In 2019, his life of service and love for his alma mater were recognized by the renaming of a BSC campus landmark, the “William B. Robertson Library,” in his honor.

The Speaker Series is an important component of the B-State Honors College, which provides exceptional educational opportunities for students in the Honors Program.  It brings together a community of faculty and students committed to academic excellence, as well as social and intellectual growth.