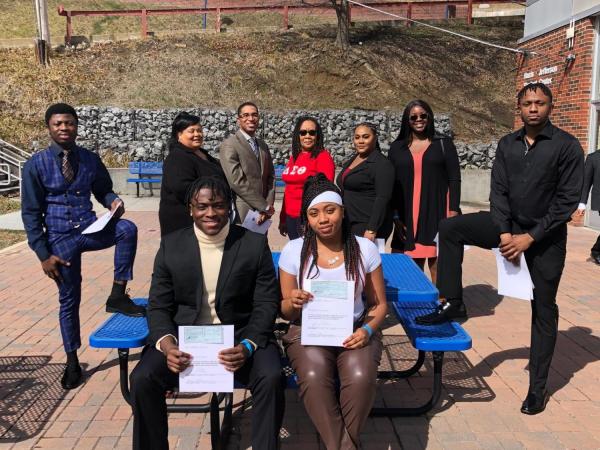 The first recipients of the “Terry Thompson and John Cardwell” scholarships are pictured at the recent Hatter Hall Scholarship Luncheon at Bluefield State College.  They are (seated, left-to-right) Damien Lynch, Aziyah Jackson, (standing, left-to-right) Michael Acheampong, Michelle Lawson, Kashif Alston, Terry Thompson (BSC retiree for whom, with John Cardwell, the scholarship was named), Patrice Sterling, Nia Lumpkins, and Desmond Freeman.  BSC alumna Tosin and Yemisi Falasinnu pledged $100,000 to create the scholarship fund, named in honor of the Bluefield State College retirees who assisted the Falasinnus during their undergraduate years at the College. The Mercer County Chapter of the BSC Alumni Association received the $100,000 pledge.

Tosin (John) Falasinnu and his sister, Yemisi (Josephine) Falasinnu are proud Bluefield State College alumni.  Following their graduation several years ago, they have enjoyed productive and fulfilling careers. Tosin is a Manager, iPhone Product Quality, at Apple, Inc. and Josephine is a registered nurse.  Both now live and work in San Jose, California.  They’ve pledged $100,000 to help other students in their academic pursuits at Bluefield State College.

The scholarship program underwritten by their generosity is named in honor of two former BSC employees, Terry Thompson and John Cardwell, both of whom are now retired.  “When Tosin and Josephine traveled from their home in Lagos, Nigeria to Bluefield State, John Cardwell and I took them under our wings, found housing for them, and helped both throughout their student years at BSC,” recalled Thompson, former Academic Advisor in the Counseling and Advising Center and Registrar at the College.

“Josephine and Tosin really appreciated our help and the support they received when they were students at Bluefield State,” Thompson continued, “and they decided to pledge $100,000 to enable more students to further their education at BSC.  Both worked as tutors when I was an academic advisor in the Counseling Center. They were like my children the entire time they attended BSC, spending every holiday with me and my family.”

The Mercer County Chapter of the Bluefield State College Alumni Association received the Falasinnus’ pledge along with their initial $10,000 check.  The scholarships will be awarded annually to Black or Hispanic students with financial need and who maintain a minimum 3.0 grade point average.

“The Falasinnus are outstanding examples of BSC success stories,” added  Cardwell, former Vice President for Student Affairs.  “Now they are in a position to give back so others can have the same educational opportunities they had.  Tosin and Josephine are true ambassadors for Bluefield State College.”