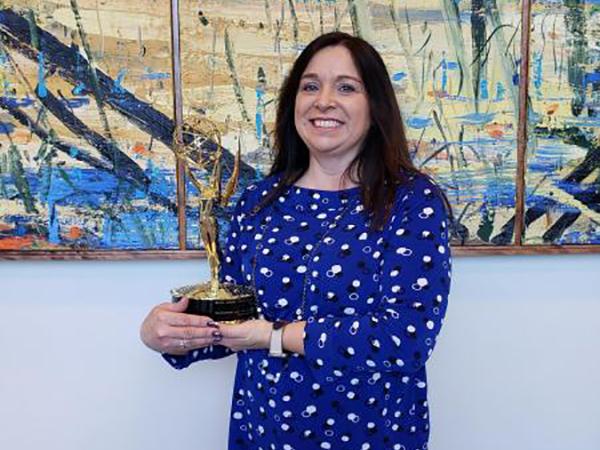 With a 2021 Emmy award on her desk, Springville, VA native Melissia Davis has traveled to the apex of her profession.  The Bluefield State graduate (Class of 1992) says the lessons she learned from family, friends, and her years at BSC contributed substantially to her career success.

An education major, she was a cheerleading teammate of Bluefield Daily Telegraph editor Samantha Myers Perry.  “I graduated from teacher education, but it was difficult to find a fulltime teaching opportunity in the area,” she explained.  “Telescripps Cable in Bluefield had an opening at that time and I thought, that may be a fun job.”

After she was hired, (Telescripps General Manager) Don Kersey asked her to handle traffic.  “I wasn’t sure what that involved,” she recalled.  “I learned that trafficking involved inserting local commercials into the system’s cable networks, and I enjoyed it.”

When Telescripps was purchased by Comcast, Davis moved to Atlanta, GA, then to Philadelphia, PA, and became traffic manager in a much larger operation.  “I remember thinking, I hope I am not making a mistake” each time she moved.  But she recalled her Dad telling her that she could be anything she wanted to be, and she knew she always had his support.

At the time she was expecting her first child, she wanted to be near her family and applied for a job in Charlotte, NC, for Time Warner Cable.  “At Time Warner, I did a little bit of everything, from engineering to traffic, technical, and inventory.”

As Time Warner grew, acquiring other cable companies, then sold to Charter Communications, Davis became Director of Traffic, then Vice President of Fulfillment.  “Essentially, I am responsible for all advertising traffic from Wisconsin to Texas to California, and about 120 people report to me,” she noted.

It was during this time that the idea of building “interconnects” was envisioned.  “We brought in the satellite piece (Dish and Direct), linking it with our traditional linear systems.  This enabled us to reach more viewers for our national advertisers,” she stated.  Through these interconnects, advertisers could place one media buy and deliver their message to vastly more customers, according to Davis.

The Emmy she received on behalf of Charter was for technical merit in the television industry.  Davis is quick to note that others played important roles in the Emmy that now sits on her desk.  “We meet with our operators and talk about new technologies, new ways of doing things, and how to use new technology,” Davis continued.  “My bosses, Chris and Kim, helped me think more creatively, more strategically, and look to the future.  They have always been big supporters and I am forever grateful to them.”

“As students graduate from high school and think about their futures, I hope they realize that bigger isn’t always better.  Sometimes, smaller is better.  What I learned at BSC has helped me throughout my life and career.  I hope every young student will aspire to greatness and remember that you are the only person holding you back from success.”