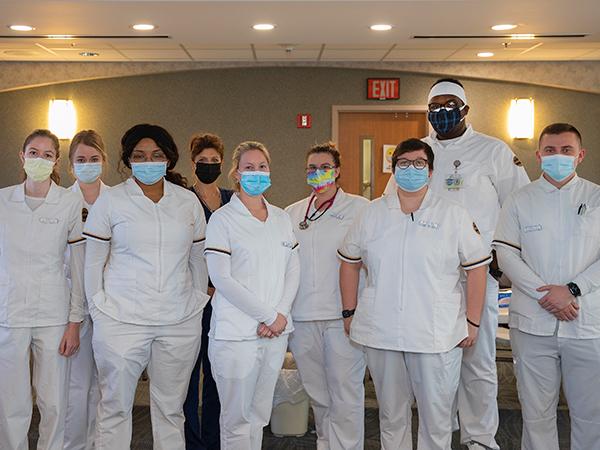 Bluefield State College has been awarded $1 million through West Virginia Gov. Jim Justice’s Nursing Workforce Expansion Program, which is designed to address the state’s nursing shortage through a multifaceted approach to attract, train, and retain nurses in the Mountain State. Representing a fundamental part of this approach, an award program was established to fund nursing program expansion projects at colleges, universities, schools of nursing, and career technical education centers across West Virginia.

Through BSC’s award, the College plans to provide an accelerated program for highly qualified nursing applicants to complete the degree in 18 months as well as increase the number nursing students admitted to the already-in-place Accelerated LPN-RN program.

The BSC projects will expand its current accelerated LPN to RN program by 10 students and start an Accelerated AD Nursing Program that can be completed in 18 months with a planned cohort of 10.  This would increase the number of highly qualified nursing students admitted to the program by 20 this year.

The proposal addresses recruitment and development of qualified applicants to the AD Nursing programs, retention of students throughout the program, and expansion of facilities to provide didactic and laboratory simulation experiences for a greater number of students.  Funding will support:

“We are honored to have been awarded $1 million to enable us to expand our nursing program,” said Bluefield State Provost and Vice President of Academic and Student Affairs, Dr. Ted Lewis. “These funds will allow us to continue to purchase state-of-the-art equipment to train our students and serve the needs of our community in producing more nurses.”

The nursing program expansion awards are administered by the West Virginia Higher Education Policy Commission and Community and Technical College System. Twenty-six funded projects across the state were announced by Gov. Justice on March 17. Approved projects were required to be focused on increasing enrollment in pre-licensure nursing programs through innovative approaches focused on timely degree completion and licensure for graduates.

“We are tremendously grateful to Gov. Justice for providing this historic funding to support the expansion of nursing education programs across West Virginia,” said Dr. Sarah Armstrong Tucker, West Virginia’s Chancellor of Higher Education. “Through these new projects, our postsecondary education community will be better positioned to help shore up West Virginia’s nursing workforce – which, in turn, will help support our nurses working tirelessly on the front lines right now.”