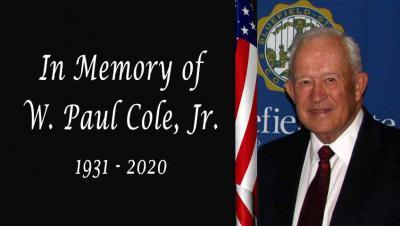 ”Bluefield State College lost a true friend with the passing of Mr. W. Paul Cole, Jr.  His commitment to the area very positively impacted the City of Bluefield, BSC, and the region.  His life served as a living example for doing things the way they should be done, and his legacy is evident in the lives of his sons—Bill, Charlie, and Tom, as expressed in their leadership and support for the community, the state, and beyond.

In 2010, the BSC School of Business was named in honor of Mr. Cole, a fitting tribute to his life of service and excellence.  Many years earlier, he served as Mayor of Bluefield, WV, and traveled with the BSC delegation to Taiwan, where he participated in establishing a partnership between Bluefield State and three institutions of higher education in the People’s Republic of China.

We pray for and remember the Cole family in this time of loss.” _____BSC President Robin Capehart

“The City of Bluefield and the region has lost an amazing man.  Paul Cole led by example--an example that touched the lives of those who had the privilege of knowing him.  As a businessman, he led from the front, directing several companies that provided employment and a brighter future for his employees and customers.  As a civic leader and Rotarian, he was mayor of Bluefield and led the city during a critical time in its history.  As a humanitarian, he generously supported his church and numerous charitable causes.

In the early 1990s, Paul played an instrumental role in strengthening Bluefield State College’s educational partnerships with international colleges and universities.  The W. Paul Cole, Jr. School of Business proudly bears his name.  His principles for successful relationships in business and in life resonate through the education Bluefield State College’s students receive.

We pray for the Cole family.  All of us are deeply saddened by his passing, and we are profoundly grateful for the experience of having known him.  _____ BSC Board of Governors’ chair Garry D. Moore