MINE SAFETY EVENT AT BSC FOCUSES ON RESCUE SKILLS 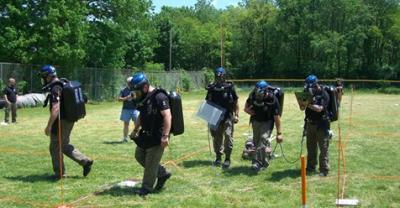 Eleven of our region’s mine rescue teams competed on May 18 at Bluefield State College (BSC) for its 13th annual mine rescue competition.

The competition was held on the June O. Shott Field at BSC, with representatives of the Mine Safety and Health Administration operating an on-site command center in Dickason Hall that responded to the scenario as if it were a real incident. Team members in the command center maintained constant communication with their team mates on the field, digitally mapping the course and recording real-time gas readings as those on the field advanced through the problem.

Developed by the Welch Post #1 known as the “Smoke Eaters” of the National Mine Rescue Association, the competition challenged teams to use skills and technology to solve a rescue scenario within an 80-minute time limit. The team finishing the course in the shortest time with the fewest mistakes wins the challenge.

The competition is hosted at BSC and sponsored by Brick Street Insurance, the Welch Post#1 Smoke Eaters, and the Center for Applied Research and Technology, Inc., (CART).