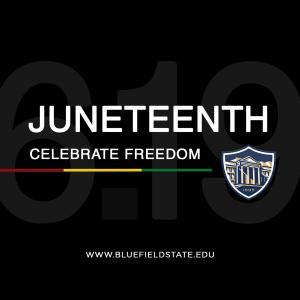 Allow me to share what Juneteenth is and what it means to both Bluefield State College and the Nation.

On January 1, 1863, the Emancipation Proclamation was issued by President Abraham Lincoln, establishing that all enslaved people in Confederate states in rebellion against the Union “shall be then, thenceforward, and forever free.”   Unfortunately, freedom for enslaved Blacks didn’t go into effect instantly. The proclamation only applied to places under Confederate control and not to slave-holding border states or rebel areas already under Union control. However, as northern troops advanced into the Confederate South, many of the enslaved fled behind Union lines.

The Emancipation Proclamation had little impact on the Texans due to the minimal number of Union troops to enforce the new Executive Order.  In 1865, at the close of the Civil War, General Gordon Granger arrived in Galveston, TX on June 19th to deliver the federal order that the war was over and the enslaved were now free.  It is often asked why there was an almost two and a half year delay in the receipt of this important information.  One story is that the original messenger was murdered on the way to Texas with the news of freedom.  Another widely held reason was that the enslavers deliberately withheld the news to maintain the enslaved labor force until after the harvest season.

The following year, on June 19th, the first official celebrations took place in Texas.  The original observances included prayer meetings and the singing of spirituals, and celebrants wore new clothes as a way of representing their newfound freedom.  The name Juneteenth was adapted as a combination of June and the nineteenth.

While Juneteenth, or Emancipation Day, has cultural significance for African-Americans, it is not solely a Black recognition or celebration.  It is a wholly American recognition.  In our nation’s history, it is but another corner turned on the long road to making real the aspirational words from the Declaration of Independence: …all men are created equal; that they are endowed by the Creator with certain unalienable rights; that among these are life, liberty, and the pursuit of happiness.

Juneteenth holds a special and significant meaning for Bluefield State College.  Without the event leading up to June 19th, 1865, the events that led to the founding of the college, thirty years late, may not have taken place.  Without the generations of students who have passed through the gate, the economic, cultural, and educational impacts on the Bluefields, Mercer County, and beyond could not have been imagined.

Juneteenth is more than a celebration.  It is a reminder that the dream of freedom and justice cannot be shackled by man or doctrine.  It will find its way into the heart and once there…it will seek emancipation.