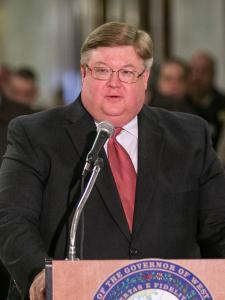 Bluefield State College President Robin Capehart has announced that the Hon. Brent D. Benjamin, whose career as a distinguished jurist and attorney spans over 35 years, has accepted appointment as Executive Vice President and General Counsel at BSC.

In announcing Justice Benjamin’s appointment, President Capehart observed, “During the past year and a half, Bluefield State College has faced and overcome significant challenges. The addition of former State Supreme Court Chief Justice Brent Benjamin to the Bluefield State administrative team is a major accomplishment, strengthening the College’s growth, viability, and capacity to serve which enhances and expands the continued positive progress of the College. Justice Benjamin brings an extensive body of experience in public service, administration, education and the practice of law that will benefit BSC and the community.”

In 2019, Bluefield State’s Board of Governors retained President Capehart to lead Bluefield State in a proactive and positive manner dedicated to restoring the success of the College and its Mission. BSC’s progress has been highlighted most recently by the College embarking on the construction of new on-campus housing for the first time in more than 50 years, the planned development of the former Bluefield Regional Medical Center for academic and community purposes, a renewed emphasis on academics and community, and the addition of 12 new intercollegiate sports programs, including football. During this time, former Justice Benjamin, as an attorney with the firm of Bailey & Wyant, has served as outside legal counsel for the College. He will now expand his legal duties to include operations, policy and planning.

In accepting his new position with Bluefield State, former Justice Benjamin said, “It is rare opportunity to work with such a talented group of individuals as are here at Bluefield State. With the vision, hard work and teamwork which has been exemplified by the Board of Governors, along with President Capehart, and the entire team here at the College, Bluefield State’s future is both bright and assured.  I look forward to serving the College, it Mission, the students, the faculty and staff, and the community.”

A graduate of The Ohio State University and The OSU School of Law, Benjamin has an extensive background in governmental and higher education affairs, civil trial and appellate litigation, and public administration.  He has taught and lectured at numerous law schools and judicial forums in the United States and Europe.  In addition to his service on West Virginia’s Supreme Court, Justice Benjamin has also practiced in the U.S. Court of Appeals for the Fourth Circuit, the U.S. District Courts for the Southern and Northern Districts of West Virginia, state courts of record in West Virginia and Kentucky, and before various administrative agencies.

Among his numerous accomplishments, Benjamin is a recipient of the Distinguished Mountaineer Award presented by Governor Earl Ray Tomblin, the Public Defender Service Award for Outstanding Scholarship in Criminal Law, has served as Chairman of West Virginia’s Access to Justice Commission, is a Fellow of the Salzburg (Austria) Global Seminar, and is a member of “Varsity O” of The Ohio State University. He has also participated in several archaeological expeditions in Egypt, including being a member of the KV63 Archaeological Mission, which, in 2006, discovered the first undisturbed tomb found in Egypt’s Valley of the Kings since the discovery of the tomb of King Tutankhamun in the 1920’s.