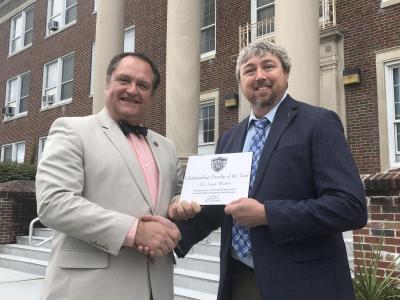 During Bluefield State College’s Faculty Institute on August 14, 2019, Dr. James Walters, Associate Professor of Biology, was honored with the 2018-2019 Outstanding Faculty of the Year Award.  The award is given annually to a faculty member chosen by the BSC Faculty Senate who goes above and beyond for the students and the institution.

In his six years as a faculty member at BSC Dr. Walters has established a productive zebrafish lab where he has trained dozens of students in hands-on lab techniques as well as publishing articles and presenting at regional and national science conferences.  Numerous grants have been awarded by WV Idea Network of Biomedical Research Excellence to support Dr. Walters’s lab.  He has been working in collaboration with researchers at WVU and Marshall to further expand his research program.  As founder and advisor to the BSC BioMedical Club Dr. Walters has mentored students on their educational and career goals, brought numerous presenters to campus, and accompanied students on visits to graduate and professional schools.  Dr. Walters was inducted as an honorary member of the Phi Eta Sigma National Honor Society due to his excellence in teaching and research.

In addition to his work at BSC, Dr. Walters can often be found at community events such as the Lemonade Festival in Bluefield and AutumnFest in Princeton presenting his outreach program, Science Works, delighting and educating community members of all ages with a glimpse into the study of developmental biology.  He has also mentored Mercer County 4-H members of the Mercer Bots Robot Rebels team and the Lego league teams during competitions.

Dr. Walters is a pivotal member of the scientific community locally and statewide.  He serves on the Board of Directors of Science Technology Entrepreneur Arts and Mentorship (STEAM) in Princeton, WV.  He is the current President of the WV Academy of Science and will be hosting a state-wide conference at BSC in 2020.

His nomination letter states, “Dr. Walters is a positive role model for students and fellow faculty alike. In my opinion, he is a quality representative of Bluefield State College while providing a top- notch education to our students.”  Dr. Amanda Matoushek, Chair of the Faculty Senate, said “I can’t think of anyone more worthy of being named Faculty of the Year.  Dr. Walters’s scholarship and dedication to his students and community are a shining example of the mission of Bluefield State.”

The Outstanding Faculty of the Year Award is supported by the BSC Foundation and the Office of the Provost.