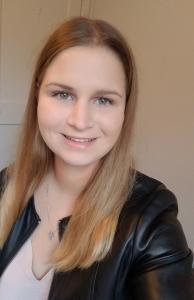 Bluefield State College student Milica Knezevic has sought and embraced challenges and opportunities throughout her life.  As she’s entered the final few weeks prior to her graduation from BSC, she received confirmation of her admission into the prestigious MBA program at Duquesne University, and she has landed a graduate research assistantship position.  Her life’s journey has been impressive and inspiring.

“I was born and raised in Novi Sad, the second largest city in Serbia,” she said.  “Serbia went through a rough phase in the 1990s, badly damaging the economy.  When I was two, the entire country, including my city, was bombed.  Despite that, I enjoyed an amazing childhood.  My parents made sure my siblings and I had everything we needed.”

She also grew aware of a world of opportunity beyond her homeland.  “Growing up, I realized that, in some other countries, hard work is rewarded, and people who really want to succeed actually do,” she continued.  “There are countries where you don’t have to be a member of a particular political party or have an influential relative in order to be successful.  When I was in high school, I decided to explore and experience life in those other countries and see what they are doing differently.’

Ms. Knezevic followed in the footsteps of her older sister, who was becoming an accomplished tennis player.  “I always looked up to her, and when she went to the United States to attend college and play tennis, that became my dream as well.”

After studying and playing intercollegiate tennis at Wilmington (Delaware) University as a freshman, she decided to transfer, contacting several NCAA Division II tennis coaches.  BSC tennis Coach Louis Belt followed up promptly.  “Coach Belt introduced me to Jelena Jevtic, a BSC student-athlete from Serbia.  After talking to both of them, I was sure that Bluefield State was the right school for me.”  Several members of the BSC tennis team are international students, as well, adding a “second family” feeling for Knesevic.

She holds leadership positions in several student organizations, including the International Student Organization (Vice President), Student Government Association (Secretary), the BSC Board of Governors (student representative on the Board, and member of the Board’s ad hoc Committee on Athletics), and the Student-Athlete Advisory Committee.

“Before arriving in the United States, I didn’t have much confidence.  I didn’t speak up and I was hesitant to face challenges and leave my comfort zone,” she continued.  “As a Business Management/Marketing major, I realize I could be successful in the business world only by overcoming my fears and trying new things.”  Her year of service as a BSC Board of Governors’ member has been beneficial, as well.  The knowledge I have gained in the classroom, as a member of student organizations, and on the Board of Governors has been very valuable.

Milica will build upon a strong academic foundation that she’s established at BSC.  “As a student in the Cole School of Business, I’ve worked with some amazing faculty.  They’ve explained things in a unique and interesting way that has motivated me to learn more,” she said.  “As a student-athlete at BSC, I realize the significance of discipline and persistence.  I’ve learned to focus on long-term goals and the importance of moving toward those goals each day.  If we skip those small steps, we won’t reach our goals.”

Her older sister, Isidora, was instrumental in Milica’s decision to continue her studies in the MBA program at Duquesne.  “Isadora received her MBA at Duquesne, and when I went to her graduation two years ago, I had a chance to meet some of the faculty and staff.  I was excited just thinking about becoming a graduate student there, and now I’m prepared to take that next step.”