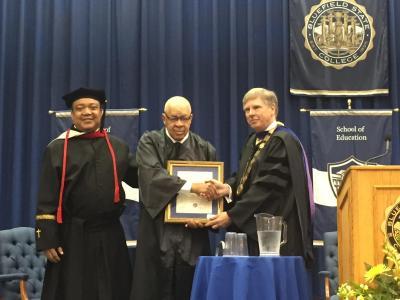 At Bluefield State College’s 2019 Commencement, BSC President Robin Capehart (right) announced that the College Library has been renamed in honor of BSC alumnus William B. Robertson (center).  The Bluefield State College Board of Governors, whose chairman, the Reverend Garry D. Moore is pictured (left) with Mr. Robertson and President Capehart, voted unanimously to rename the library to honor Mr. Robertson.

BSC Board of Governors by Unanimous Vote Names the Library the “William B. Robertson Library”

Moments after he delivered an inspiring commencement address to Bluefield State College’s 2019 graduating class, BSC alumnus William B. Robertson was honored.  College President Robin Capehart announced that the Bluefield State Library has been named the “William B. Robertson Library” to honor the graduation speaker, whose career included service in the administrations of five United States Presidents.

“The Bluefield State College Board of Governors, by unanimous vote, has chosen to honor Mr. Robertson in this manner,” President Capehart explained.  A proclamation signed by BSC Board chair Garry Moore, saluted Robertson’s “career in education and public service in which he would pass along to others the gift of wisdom and inspiration he had received” at Bluefield State.

Robertson led a statewide program through which the Virginia Jaycees raised enough money to establish a camp for people who are developmentally disabled.  Camp Virginia served more than 42,000 individuals with special needs over four decades.  Later, he served in an executive capacity with the U.S. Department of State to help lead its African Affairs program, during which he was the Director of the Peace Corps in Kenya.

Following his retirement from public service, Robertson returned to the classroom to teach in an inner city middle school in Tampa, FL.  For many years, he brought groups of young students from Tampa’s Sligh Middle School each summer to visit his alma mater and encourage them to pursue a college education.