BSC Day at the State Legislature, Celebration of the College's 125th Anniversary 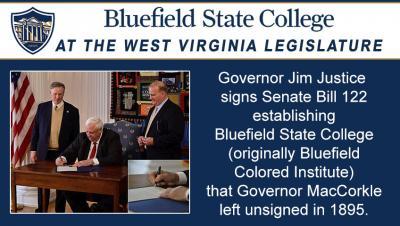 On February 21, 125 years after the bill creating Bluefield State College was passed but not signed by West Virginia's Governor William MacCorkle, Senate Bill 122 now bears the signature of the Mountain State's Governor.

Highlighting a daylong celebration at the State Capitol, Governor Jim Justice signed the bill during a ceremony and program.  "When it came to my attention that this bill was just sitting, unsigned, for 125 years, I knew that signing it was the right thing to do," the Governor said, noting that he signed the bill in honor of BSC's "great contributions to West Virginia and in honor of the countless alumni who have made an impact on West Virginia and the world."

BSC students, employees, alumni, members of the College's Board of Governors, legislators, and community members took part in the day's events.  The ground floor of the Capitol rotunda hosted BSC exhibits, during which Capitol administrators, guests, and media met the College's representatives.

"This is a great day for Bluefield State College," observed BSC President Robin Capehart.  "It has been a showcase for the excellence of our students, our programs, and it has showcased the proud and heroic history of the College."