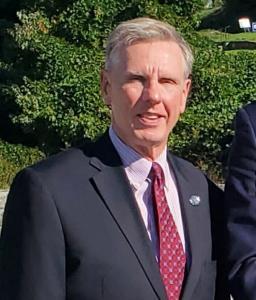 The city of Wheeling entered into a memorandum of understanding with Bluefield State College on Tuesday for the use of property on the former Ohio Valley Medical Center campus, which the city acquired last year.

According to the memorandum, Bluefield State College is looking to use a portion of property on the former hospital campus as a newly established engineering and manufacturing center for training of engineering professionals.

The city and the university are expected to work together to identify specific buildings on the OVMC property that best suits the intended use by the college. Officials from Bluefield State College are not only looking at space for educational purposes, but according to the memorandum, are also interested in facilities for student housing, food services and parking.

Bluefield State College’s main campus is located in Bluefield, W.Va., in the southernmost region of the state. Bluefield State College President Robin Capehart joined Wheeling city officials on Tuesday during the first city council meeting of the year, when the memorandum was approved following an executive session of the Development Committee of Council to discuss the matter.

THE CITY OF WHEELING, WV

On behalf of the Board of Governors, faculty, staff and administration of Bluefield State College, we would like to thank the Wheeling City Council, the City Manager and the office of economic development for their support of our efforts to establish an Energy and Manufacturing Center in Wheeling. While there are several steps we still need to take to bring this project to realization, we look forward to a strong partnership with the City of Wheeling as we seek to bring high quality, two-year engineering technology programs to a part of the state where such opportunities are in great demand.

Bluefield State boasts one of most outstanding accredited engineering technology programs in the nation. The accomplishments of this applied program are well-documented in terms of a job placement rate of over 95% and its sponsorship of a world-class robotics team that has won the international Intelligent Ground Vehicle Competition (IGVC) twice in the last ten years competing against mostly graduate students from schools such as MIT, Georgia Tech and the U.S. Military Academy as well as teams from Japan, India and British Columbia. The IGVC is a showplace for new technology intended for use in the development of the driverless car.

In 2019, the marketing department at Bluefield State conducted surveys throughout West Virginia and in contiguous states to locate areas of interest for engineering technology programs. The results revealed an extremely high demand in northern panhandle of West Virginia, eastern Ohio and portions of western Pennsylvania where programs were not being offered.

In response, we met with 16 representatives of manufacturing firms throughout the Ohio Valley who expressed their support for such programs that will address a critical employment need. In addition, local manufacturing firms agreed to serve as a valuable source for adjunct professors.

The former Ohio Valley Medical Center provides excellent facilities that are adaptable to the needs of our engineering technology programs.

Again, on behalf Bluefield State College, we would thank you for your support as we look forward to working with you to meet the needs of our students, our employers and our community.