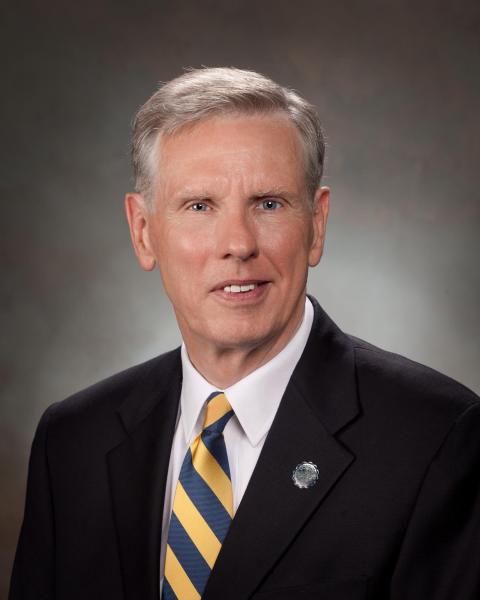 Two years after a candid discussion with Bluefield State College employees about the school’s formidable financial challenges, BSC President Robin Capehart detailed the marked improvement that has occurred since that time.

During a November 19, 2021 address to an in-person audience in the Hebert Gallery and to a virtual audience online, the BSC President recalled, “When the November 2019 meeting took place, many believed the purpose was to announce massive layoffs or, even, the closing of the school.”  Citing a 40% decline in enrollment over eight years (2011-2019), Capehart said the College’s cumulative financial index, or CFI, (a measure of the institution’s financial stress) was the worst among all public colleges in West Virginia.

“In 2019, we told the campus community that we still had to face the reality that, in the highly competitive higher education marketplace, closing colleges had become a regular occurrence,” he continued.  “But then, we reassured the campus that we had no intention of closing Bluefield State, but not just to survive, but to thrive.  Tough decisions would have to be made that were consistent with sound business principles and a model for growth.”

“Since that time, we’ve done some things that we heard could not be done,” Capehart added, citing achievements that included establishing campus housing for the first time in 50+ years and launching 13 new sports (including the return of football for the first time since 1981).  Additionally, Bluefield State’s financial condition has improved so markedly that BSC’s CFI now ranks second-highest among all state public colleges in West Virginia.

“We are the fastest growing college in West Virginia and, at least, one of the fastest growing Historically Black Colleges in the country,” the BSC President stated.  The institution’s Fall 2021 headcount enrollment increased by 9.3%.  An aggressive marketing program and the additions of housing and new athletics programs have contributed to a 244% increase in the number of out-of-state students attending Bluefield State, he observed.  The number of states from which BSC attracted students rose from seven (Fall 2020) to 32 (Fall 2021).

“We still have much more work to do, and were looking forward to completing our strategic plan that will provide us a roadmap for the next few years,” President Capehart summarized.  “But let’s pause for a moment just to be thankful for the blessings we’ve received over the past two years, and for me to offer—on behalf of our Board of Governors—a heartfelt thank you to the dedicated staff and faculty at Bluefield State College for all their efforts in making this renaissance a reality.”