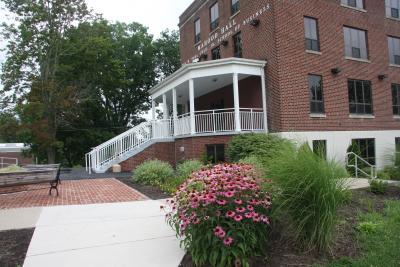 May 18—Bluefield State College served as the host site for the 13th annual Mine Rescue Competition.  Representatives of the Mine Safety and Health Administration operated an on-site command center during the competition.  The Center for Applied Research and Technology, Inc. (CART) has been actively involved in the event since its creation.

May 19—The Bluefield State College Renaissance Celebration provided southern West Virginians an opportunity to enjoy fellowship, good food, and good music at the Erma Byrd Higher Education Center.  The Renaissance Celebration reached out to Black and faith-based communities who may be underserved or underrepresented.  Attendees learned more about their post-secondary education options and the resources available to make earning a degree possible.

May 22--The addition of eight technology-laden intravenous training arms permits BSC’s nursing students to practice and perfect their techniques for blood flow, venipuncture, and phlebotomy procedures in a laboratory setting before the students perform the same procedures in a clinical setting.

May 28—Dr. Saul Njie, Visiting Professor of Political Science at BSC, was a team member of the United States Government Accountability Office’s Financial Markets and Community Investment division, which testified before the U.S. House Subcommittee on Investigations, Oversight, and Regulations concerning the Small Business Administration’s efforts to foster entrepreneurship at HBCUs.

May 28—President Capehart was the featured speaker at a meeting of the Lewisburg, WV Rotary Club. He has spoken to six Rotary Clubs and one county economic development organization throughout the region during the past four months.

June 1, 2019—President Capehart met with numerous BSC alumni living in the Charlotte, NC and Roanoke, VA areas.  During a series of presentations, he discussed the anticipated return of student housing to the campus, along with other recent developments at Bluefield State College and requested and received input from College alumni at the meetings.

June 10—The annual Bluefield State College Athletics Golf Tournament was held at Fincastle on the Mountain.

June 18-- Bluefield State College announced that it has expanded opportunities for students in West Virginia by introducing the Blue and Gold Opportunity Plan, effective in fall 2019.  The new initiative provides free tuition to qualified students enrolled in any of more than one dozen high-skilled, high-wage, high-demand programs.  To qualify, a student must be a West Virginia resident, Pell eligible, complete his or her Free Application for Federal Student Aid (FAFSA) by April 15, maintain a 2.0 Grade Point Average (GPA), and demonstrate progress toward a degree.

June 25—A Request for Quotation was issued for architectural/engineering design services to submit proposals for the design of on-campus student housing at Bluefield State College.  By late June, eight first had submitted proposals.  The deadline for submission of quotes is July 22, and the contract will be awarded on July 31.

June 25—President Capehart will be interviewed by WVVA TV News Anchor Melinda Zosh during a taping session for a future “In Focus” program on the station.

July 11—Representatives from the West Virginia Executive magazine will come to campus to interview President Capehart in development of an issue of the publication that will be devoted to higher education in West Virginia.

July 22—Bluefield State will sponsor a “Night at the Ballpark,” July 22 at Bowen Field in Bluefield.  The event features free admission for all, and the BSC world championship robotics team and BSC admissions counselors will be on hand.  The game begins at 6:30 pm.