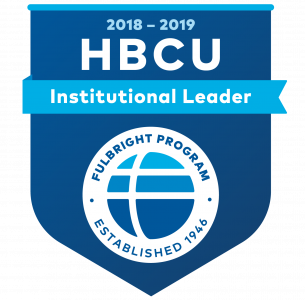 Bluefield State College is proud to be named a 2018-2019 Fulbright HBCU Institutional Leader by the Fulbright Program of the U.S. Department of State’s Bureau of Educational and Cultural Affairs (ECA), the U.S. government's flagship international educational exchange program.

BSC has been named one of the 19 Historically Black Colleges and Universities to receive this inaugural “Fulbright HBCU Institutional Leader” designation that have demonstrated noteworthy support for Fulbright exchange participants during the 2018-2019 academic year and have promoted Fulbright Program opportunities on campus.

“Bluefield State College is honored to be selected as a ‘Fulbright HBCU Institutional Leader,’” noted Robin Capehart, BSC President.  “Dr. Sudhakar Jamkhandi (Director of the Office of International Initiatives at BSC) has done an outstanding job as the College’s liaison to the Fulbright Program. Through his ‘Windows of the World’ lecture series, many Fulbright scholars have helped students from area public schools and BSC, along with community members, gain a greater understanding and appreciation for other cultures and their areas of expertise.  In the process, the Fulbright presenters have enriched the educational experience for everyone involved.”

Added BSC Provost and VP for Academic and Student Affairs Dr. Ted Lewis, “We are honored to be recognized among the inaugural group of 19 Fulbright HBCU Institutional Leaders. This recognition reflects the deep commitment of the Office of International Initiatives, our faculty, and staff to provide a global awareness to our college and community through the Fulbright Program.”

“We are the only higher education institution in West Virginia that shares this vital international resource with area public schools, with help from the West Virginia Humanities Council and a local donor,” noted Dr. Jamkhandi. “The Fulbright scholars’ visits manifest BSC’s strong ties between BSC and residents in southern West Virginia and Virginia. Without the support of generous global minded home stay hosts in Bluefield and Princeton—Pete Sternloff, Doris Sue and Norris Kantor, Jan and Dave Farley, Rodger Woodrum, Linda and Larry Bray, Vicky and David Harris, Kitt and Gary McCarthy, Chandler Swope, Pat Wilson, to name a few-- we would not be able to have Fulbright scholars in our midst.”

Bluefield State College has a few “Fulbrighters.” In 2006, the U.S. Department of State and the Council for International Exchange of Scholars named Capehart a Fulbright Scholar.  In that capacity, he taught Public Finance at Moldova State University in Chisinau, Moldova and conducted extensive research and provided consultation regarding the Moldovan property tax system.

Phillip Imel, Dean of the Paul Cole School of Business Dean taught accounting and finance in Ekaterinburg, Russia in 2011, and Dr. Jamkhandi was designated Fulbright Specialist in Internationalizing Higher Education, 2011 to 2016.

Assistant Secretary of State for Educational and Cultural Affairs Marie Royce conveyed her congratulations by stating, “We are pleased to recognize our Fulbright HBCU Institutional Leaders for the work they have done in engaging with the Fulbright Program. We look forward to continued collaboration in promoting mutual understanding between the people of the United States and the people of other countries. We hope that this recognition inspires HBCUs as well as other institutions to take advantage of all the Fulbright Program has to offer – internationalizing campuses while supporting scholars and students who benefit professionally and personally from a Fulbright experience.” For more information about the Fulbright program, visit eca.state.gov/fulbright.

Said Dr. Jamkhandi, “Bluefield State College’s affiliation with the US Department of State began in 1996 when we helped build the capacities of professionals from emerging democracies to establish democratic institutions, rule of law, and accountable governance within their public and private sectors. Since 2006, Bluefield State’s mission of preparing global citizens has been manifested mainly through Fulbright Programs such as the Fulbright Africa Undergraduate Scholars, Fulbright Language Teaching Assistants, and the Fulbright Scholars in Residence, two of whom have been from Russia and one from Liberia.”

The personal relations fostered by the Fulbright Program have resulted in several partnerships between Bluefield State College and international higher education institutions to promote student and faculty exchanges, collaborative research, and information exchange and manifest well the United States government’s goal of promoting mutual understanding between the people of the United States and the people of other countries. To learn about how Bluefield State College participates in the Fulbright Program and prepares students for global citizenship, please visit https://bluefieldstate.edu/resources/international-initiatives .