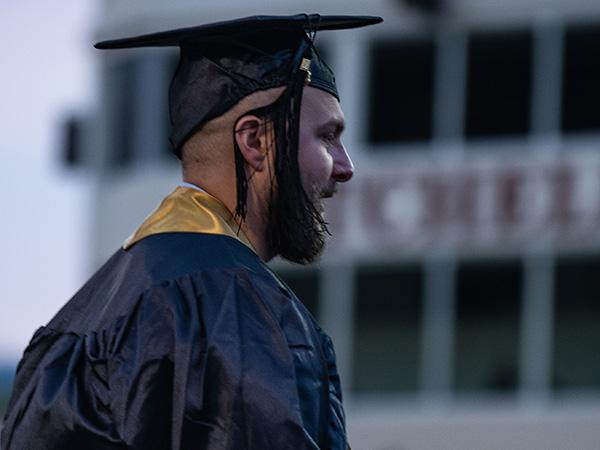 The 239 students in the Bluefield State College Class of 2022 had the opportunity to experience and celebrate the milestone achievement of their graduation during the College’s 125th Commencement program on April 30 at Mitchell Stadium in Bluefield.

Following the processional and the PikeView High School JROTC cadets’ posting of the colors, BSC President Robin Capehart congratulated this year’s graduating class, their families, BSC faculty and staff, Bluefield State alumni, and friends.  Speakers including the Reverend Garry Moore, BSC Board of Governors chair, and Dr. Ted Lewis, BSC Provost, who saluted the Class of ‘22 for its collective commitment to excellence, academic achievement, and service.

Class of ’22 graduate Desmond Freeman received the “Brian Delp Service Leadership Award.” The Greensboro, NC resident, a sports management major at BSC, was also President of the College’s Emerging Leaders Institute.  He enjoyed a solid career as a member of the B-State basketball squad.

Shortly after the Commencement concluded, a festive fireworks show at Mitchell Stadium saluted the Class of '22 graduates, their families, and the BSC community.